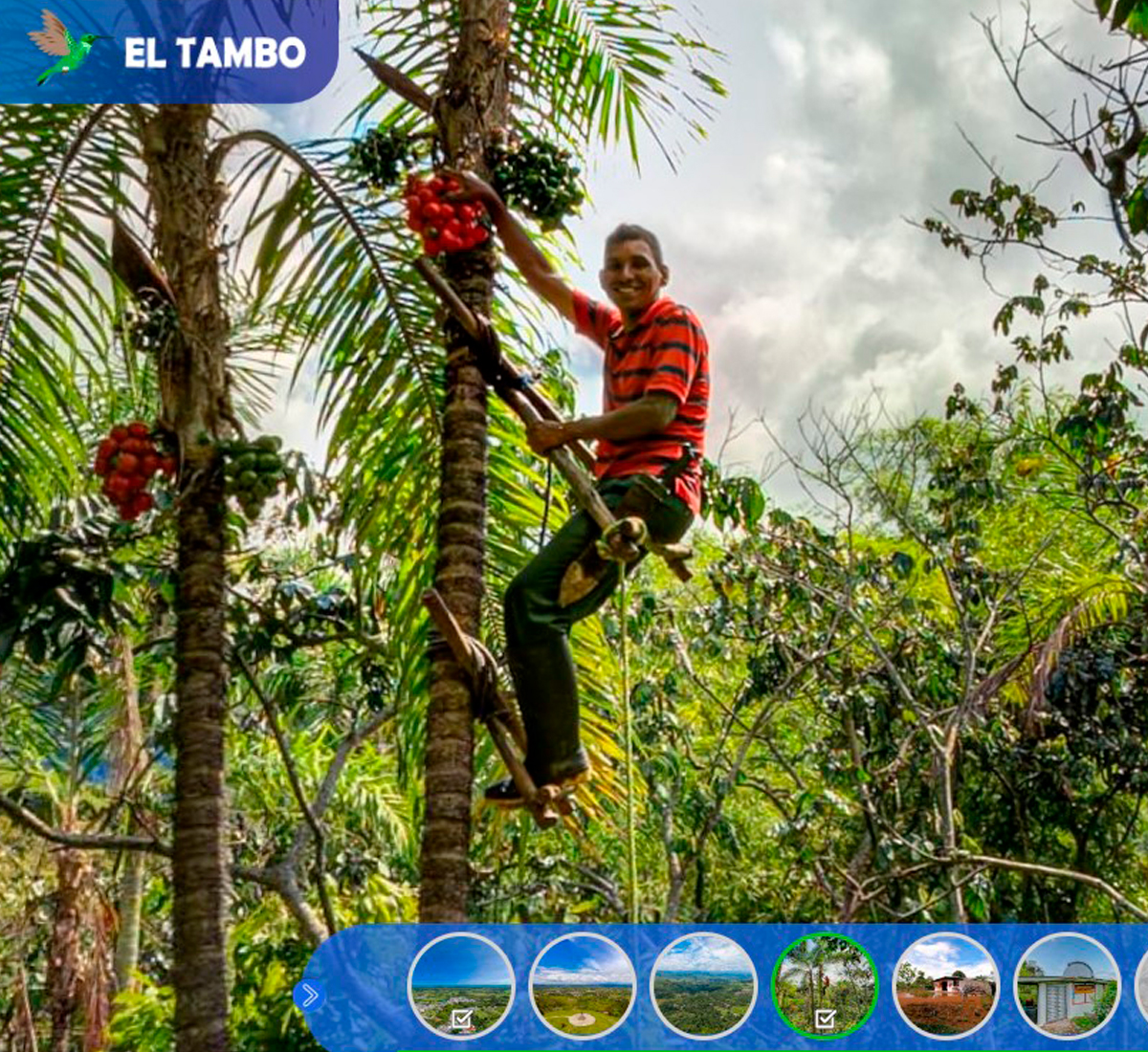 This is the story of El Tambo 360, a virtual tour and one of our experiences building peace in a territory affected by the conflict. Learn why we arrived once again to the southwest of Colombia and took the challenging, but also rewarding task of supporting rural tourism in this region of the country.

How can a virtual tour help build peace?  Yes, that’s the question on your mind. And although we could well tell you that the answer is:  because it is an innovative technology (which it is), the truth is that it goes far beyond that. But you will only find out when you read this story.

This time we will talk about our project El Tambo 360 and we will tell you why it is a virtual tour that builds peace in Colombia. For that we will take you to know El Tambo, its history, the reasons that led us to create this experience and the results that affirm our commitment to continue this kind of projects.

Let’s start with a little context.

What is El Tambo?

El Tambo is a magnificent land in the heart of the department of Cauca, one of the richest regions in culture and biodiversity of southwestern Colombia. You probably don’t know it, but this municipality is located just an hour from Popayán, capital of Cauca and is extensive. The surface of El Tambo is greater than 3,200 km2, that is, as large as the department of Atlántico and even larger than Luxembourg.

El Tambo’s greatest strength is its privileged geography. Many call it the “pantry of Cauca“, because it produces a great variety of crops thanks to its 3 thermal floors. For this reason, almost 70% of its 48 thousand inhabitants are dedicated to agriculture. It is also the reason that almost the entire municipality is rural and that 90% of El Tambo’s inhabitants live in the countryside.

The rich geography of El Tambo is also the reason for its a unique and protected biodiversity. If you visit this municipality, you will find the Munchique National Natural Park, a reserve with more than 440 Km2 of mountains, forests and rivers where thousands of wild animals live. It is a place where you will enjoy adventures in nature and you might be fascinated by bird watching, because it is the habitat of 500 species, including specimens that you could not see anywhere else in the world.

But despite so much natural wealth and potential for sustainable development, El Tambo has not been able to shine las the paradise it is.

Unfortunately, the history of El Tambo and El Cauca is very similar to that of regions that have been affected by underdevelopment and armed conflict in Colombia.

The decades of Colombia’s armed conflict and its relationship to underdevelopment have been extensively recorded and are not the focus of this article. But it’s worth knowing a few facts, just so you can better understand the context of our work.

Until 2022, the Victims Unit reported a figure of more than 500 thousand people as victims of the armed conflict in Cauca, almost a third of the department’s population. In El Tambo, this figure is more than 50,000 people, of whom more than 38,000 were forced to leave their homes, the equivalent of almost the entire current population.

Even so, violence has been only part of the municipality’s major problems.

El Tambo has also lacked social investment. Unpaved roads and trails are almost the only option available, something unsuitable for a constant transport of people in remote areas and also of goods, whose low productivity is due to the use of deficient technologies. These are some of the reasons that have made it difficult for farmers to work and access services for years.

Unfortunately, the difficult situation of the municipality has meant that, for several years now, many of El Tambo’s inhabitants have begun to depend on illicit crops and illegal economies to be able to subsist without leaving their homes. For this reason, many believe it is a violent and unsafe place.

The truth is that, thanks to the work of many people, including our team at Perspektiva 360, we have seen positive changes in recent years.

The Spark of hope

The year 2016 was a time of great hope for the country. The signing of a historic peace agreement between the government and the FARC, one of the largest and oldest guerrillas on the continent, showed that building a Colombia in peace was possible. The country had not lived so peacefully in decades.

In compliance with the first point of the agreement, the Integral Rural Reform, the PDET territories were born: 170 of the municipalities most affected by the conflict that would be the focus of special programs for their development. El Tambo was one of them. This motivated its inhabitants to be one of the first communities to leave aside illegal economies to embrace new opportunities.

Tourism emerged as an attractive alternative for sustainable development that would take advantage of the region’s strengths and characteristics. However, this meant a major challenge: changing the world’s image of El Tambo.

Seeing this, our allies in Cauca, Get Up And Go Colombia, promoted in 2019 the “Tourism for El Tambo” initiative, part of a macro-project co-financed by the USAID program: Territorios de Oportunidad. And since building peace and sustainability is part of our principles, at Perspektiva 360 we did not hesitate to join the project by supporting with 360 technology.

The beneficiary organization was the Association of Tour Operators of El Tambo ASOTURT. This association of entrepreneurs had a dozen tourism projects throughout El Tambo, but it was difficult for them to publicize their offer, both because of prejudices about the territory and the lack of tools to communicate, show reality and overthrow these ideas.

ASOTURT took the first step with Get Up And Go Colombia, who accompanied them in the establishment of the travel agency Turismo En El Tambo and their first marketing activities. The next step was taken with Perspektiva 360.

During part of the years 2020 and 2021, we developed and implemented the project “El Tambo 360”, a virtual tour and sales tool with which we made a great production of content: photography and 360 video for more than 20 scenarios around El Tambo.

El Tambo and ASOTURT opened their doors to us and together we built the tour: El Tambo 360. The community shared with us all their experience, knowledge and, with our accompaniment, made decisions that were reflected in an incredible virtual tour. (wait until you see it)

The focus was on tourism experiences: adventure and biodiversity, which users could choose to get to know El Tambo according to their tastes. Thus, with the company of an evocative audio design, in this virtual tour you can find 360 photos and videos of great mountain landscapes where there are many attractions: biodiverse farms, glampings, an astronomical observatory, canyoning experiences, mountain biking and other extreme sports.

In addition, in some scenarios, the entrepreneurs will tell you the story of their project and invite you to get to know their region, something that brings you much closer to reality. After all, the virtual tour was designed to empower the community.

The virtual tour was incorporated into the website of the agency Turismo en El Tambo and has since been a centerpiece of its communications strategies.

Speaking recently with the managers of the agency Turismo en El Tambo, we learned that one of the most frequent uses of the tour occurs through the agency’s corporate WhatsApp. When you, as a potential customer, want to learn about and quote for the available experiences, they will send you the information along with a link to the virtual tour.

Likewise, the link to the virtual tour is sent or presented to potential customers outside the country, because places like El Tambo are a great attraction for foreign travelers. For this reason, the tour includes an English version that helps to communicate the attractions of the region to non-Spanish speakers who wish to know the destination before their arrival in the country.

We were also able to learn that other clients with whom they have been able to establish relationships have been foreign tourism agents. This is thanks to the fact that it is very easy to send the virtual tour or present it at international events, either in person or through the web.

All these uses and more have had an impact not only the public outside the municipality, but also the people of El Tambo.

The most significant impacts

One of the problems that we noticed when working with Get Up And Go Colombia was that the lack of knowledge and prejudices about the region were present in the minds of absolutely everyone. The people of Tambo did not believe in their region, they saw it as violent and vulnerable enough to be a tourist destination. That is why even today many are surprised (and surely you will be too) to see the photographs and 360 videos of all the richness that surrounds El Tambo.

Today, many of El Tambo’s inhabitants firmly believe that it is worthwhile to know and work for their region. That is why, from the very first moment, changing the mentality and strengthening resilience has been one of the best impacts of this virtual tour.

A chance to thrive

The positive effect on the image of El Tambo has also naturally reached the target audience of the virtual tour. People like you, in different parts of Cauca and southwestern Colombia, have included the municipality in their destinations to spend time relaxing and living adventures in nature.

The virtual tour, along with other components of the Tourism for El Tambo project, have directly and indirectly benefited economically more than 200 families in the municipality.

Another major problem that damaged El Tambo’s image was its lack of online positioning as a tourist destination. If you Google El Tambo, you will probably find alarming information. This is because the media coverage is the most relevant and, as in other areas, it focuses more on transmitting negative news than other events.

However, the launch of the virtual tour occurred when Colombia was still overcoming the SARS-Cov2 pandemic. The restrictions on tourism and the boom in digital transformation made El Tambo 360 the best tool to position the tour as an emerging tourist destination. If you do a search for El Tambo related to tourism, you will notice that it has counteracted the negative effect of other content.

Currently, Turismo en El Tambo is one of the few tourism agencies in Colombia that has a virtual tour to publicize its commercial offer. Never before has a territory like El Tambo been seen through high quality 360 photographs and videos that influence its attractiveness and competitiveness, which makes it a milestone for the region and an example of development for the country.

And finally, what you were waiting for. In the following frame you can take a look at the virtual tour El Tambo 360 or even better, to enjoy a great experience in full screen you can click on the following link:

Let’s finish returning to the question with which we began this article: How can a virtual tour contribute to peacebuilding? As we saw, the answer is not necessarily a miracle of technology, because beyond that are people who share experiences, ideas and, above all, principles. That is why our team at Perspektiva 360 achieves impact results in each project.

Now you know that it is possible to build peace and support the development of any place in the world that needs it, with the help of a virtual tour to communicate ideas and realities. If you have a project related to peace building, sustainable development or tourism, surely our virtual tours are the solution you need to help you achieve the results you expect. Contact us to chat and take the next step with us.